The quote above summarizes my idea of what a good classroom should be. As a student, I could never learn by sitting through lectures or by watching and listening someone teach. I had to get involved in the lesson and actively perform a task in order to understand it. As a teacher, it took me years of experimenting before I realized that my students were no different. Having taught English as Second Language for several years, I developed a repertoire of various hand-on classes that would assist my students in developing a good command of the language by performing a variety of meaningful tasks.

However, as a certified mathematics and science teacher, I faced a new problem - a lot of those activities were non-transferable, so I had to develop new strategies in helping my students learn by doing, which has been my goal as a teacher since I began the Master of Teaching program at University of Toronto. 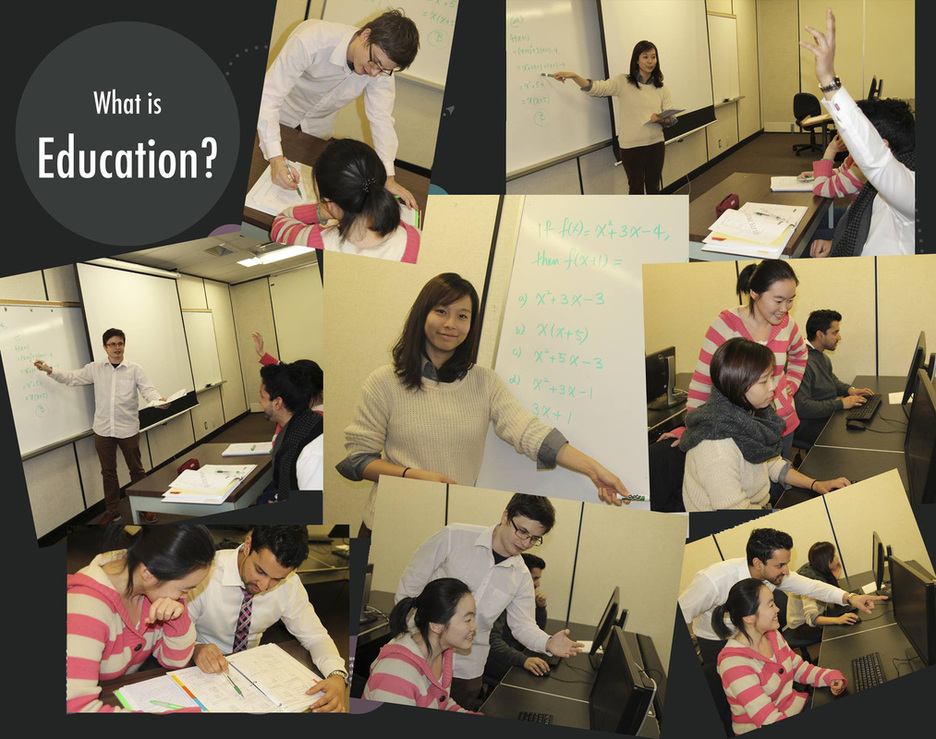 MY PHILOSOPHY IN A NUTSHELL

I believe that each classroom is a unique community of learners, with each student possessing a distinct collection of skills and abilities. As a teacher, my role is to cultivate these abilities and to use collaborative learning strategies, critical thinking techniques and technology tools in creating vibrant, peer-driven classroom dynamics. I incorporate students’ interests, world events and daily life as well as curriculum expectations into each lesson and engage my students in every step of the lesson. I believe that through differentiated instruction, active collaborative learning and by directly involving the students in the lesson I am teaching them to become caring, active members of society.

In order to relate to my students, I often try to combine their interests into my classes. For example, when I found out that a lot of the students from the boarding school where I worked liked participating in the Mock UN, I decided to try a similar activity with each student representing a country on the brink of war. Using this activity to teach critical thinking and reasoning in my English class, helped my students to develop the necessary skills using something they were already familiar with. And the fact that they did start the war in the end helped them reflect on the difficulties associated with such negotiations in real life.

I also put a lot of emphasis on learning as a group and learning from each other, rather than approaching the classroom with me as a center of attention. I encourage my students to see me as a guide and a resource provider, not a dictator in the middle of the class. I noticed that removing the teacher from the middle of the classroom and giving the students the freedom to explore the topic at their own pace with me as a guide created an incredible classroom dynamic, something that I really enjoy and will try to perfect in the future.

In the last two years as a teacher, I started to integrate various technologies that are often seen as nuisance or a waste of time into my classroom. For example, on several occasions, I asked my students to use their smartphones as a kind of an augmented reality tool to either solve scientific puzzles and look for clues or find answers on the internet in order to create a self-guided learning environment. This also helped the students to see their phones as something more than a communication device and created a positive learning environment because I always encourage students to work in groups and learn together.

I also began using graphing tablets instead of relying on chalk and talk. These are tools that can be used to draw/write on the screen while using a projector, but from any place in the classroom. This helped me to break the teacher centered learning approach and shift to a student centered classroom while at the same time being able to observe my students from the back of the class, while making sure everyone is on-task.

Finally, my research project right now and hopefully the future of my classroom is in regards to using video games and video game theory in the classroom. Having seen several very convincing examples of video games used in education and the application of game theory to class, I decided that this was something I would like to try one day as well. Despite the negative perception most people have of video games today, I believe it’s an important part of our future, as video games have already overtaken TV and movie industries financially. So, instead of shying away from it or blaming video games on bad behavior in teenagers, I believe we have to change our approach and to teach the new generation of students using the games they are so familiar with. More information about my project is available here.

Mathematics has always been my favorite subject and despite people always saying that math is important because it is everywhere, I believe that math truly is everywhere and encourage my students to explore this idea firsthand. I find there are a lot more ways to teach math creatively than any other subject and I have successfully engaged my students with such activities as code breaking, internet based treasure hunts, using student art and turning it into math, exploratory math trails and computer based interactive labs.

For example, I taught a grade 10-11 functions unit and the unit on inverse functions by introducing the idea of ciphers and codes during the week of Remembrance in Canada. I related the code breaking to war efforts and explained the importance of ciphers, as well as helped students see how easy code breaking is once you understand it. I then asked the students to first code messages using various functions we learned and then decode each other's messages using an inverse function.

This class required very little preparation on my part and involved a several period activity with students actively trying to trick each other by coming up with progressively more and more difficult ciphers until the idea of functions and inverse functions became second nature to them. My job in this class was to guide them and to clear up the confusion, but other than encouraging comments, I did very little talking myself.

In my time as a science teacher I tried to actively integrate computers and internet technology into my classroom and encourage my students to actively explore various concepts online.The advances in internet based technology brought with them websites entirely dedicated to various science related activities that can be done in class at any time, so in addition to traditional labs, I started to integrate various computer based labs that are exceptionally good for students who are visual learners.

For example a Colorado University PhET labs is a website dedicated to providing free computer labs for high school science students and is continuously updated with new additions. Having successfully used their simulations to teach some of the more difficult topics in Biology and Earth Sciences, I developed entire units based on the labs that are available on their site.

For example, when teaching a class on radioactive dating in grade 12 Earth Sciences unit, I used the lab that involved searching for fossils in a virtual environment and identifying fossil age by using various radioactive dating tools (worksheet available here). What was usually a boring class filled with confused students asking questions about radioactive decay became an interactive, collaborative experience with students comparing their findings, while at the same time learning additional concepts that were covered later in the unit.

Teaching students actively and engaging them not only in the lesson, but in their own learning is a very important part of my classroom. When planning new units, I never ask myself "what should I teach them now?" but I always ask "how would I want to learn this?"


Being a hands-on individual myself, I often find various activities, puzzles, games and interactive media that can be integrated into my class in order to help the students grasp the concept and practice as they learn. And with the modern perspective that "math is hard" and "science is for nerds", I tend to bring out the best in my students by helping them understand how absolutely incredible both math and science are and how essential they both are to our daily lives today.
Powered by